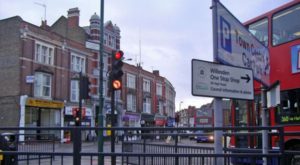 Although her novels are fictional, Zadie Smith’s artful depictions of the city are profoundly spatial. Her stories are predominantly located in and around Willesden in North West London where she grew up, dealing with intersecting themes of race and class, encountering diasporic communities, economic inequality and gentrification.

In her 2012 novel NW, she locates scenes through highly specific descriptions of the urban fabric, detailing street names, park entrances, crossings, churches, pubs and benches. She weaves her characters through Afro-Caribbean grocers selling okra and yams on busy Willesden Lane and Kilburn High Street, along rows of middle-class Victorian terraces, across post-war housing estates, under the sweeping concrete underpass of the West Way; navigating the socio-economic and political systems that create each particular architectural condition.

In NW, two particular descriptions of places have stayed with me.

1. Two characters, Leah and Natalie, alongside Natalie’s children, visit a church in Willesden, marooned on each side by a dual carriageway and roundabout. The description of the church is indicative of London’s multi-layered historic and contemporary fabric, and highlights the difficult pedestrian experience of a car dominated urban plan, especially as navigated on foot by mothers with pushchairs. (See Leslie Kern’s ‘Feminist City: Claiming Space in a Man-made World)

The road winds. They find themselves on a thin strip of pavement with a bollard at the end, clutching the children as the cars zoom by either side. To their right, a foreclosed shopping arcade and a misconceived office block, empty, every other window broken. To their left, a grassy island nestled beside a dual carriageway. … A little country church, a medical country church, stranded on this half-acre, in the middle of a roundabout. Out of time, out of place. A force field of serenity surrounds it. A low encircling brick wall marks the ancient boundary, no more a defence than a ring of daisies.”  (pp. 90-91)

2. Towards the end of the book, the character Natalie walks at night from Willesden Lane, across Hampstead Heath, to Hornsey Lane. This passage is taken from the end of her journey, as she stands on Hornsey Lane bridge, which since the book’s publication, has been further fortified with taller suicide prevention railings. As Natalie looks out over London, her description of the view is melancholy and distant, a city she is deeply connected to but one she feels is not hers.

The view was cross-hatched. St Paul’s in one box. The Gherkin in another. Half a tree. Half a car. Cupolas, spires. Squares, rectangles, half-moons, stars. It was impossible to get any sense of the whole. From up here the bus lane was a red gash through the city. The tower blocks were the only thing she could see that made any sense, separated from each other, yet communicating. From this distance, they had a logic, stone posts driven into an ancient field, waiting for something to be laid on top of the them, a statue perhaps or a platform. ( p. 411)